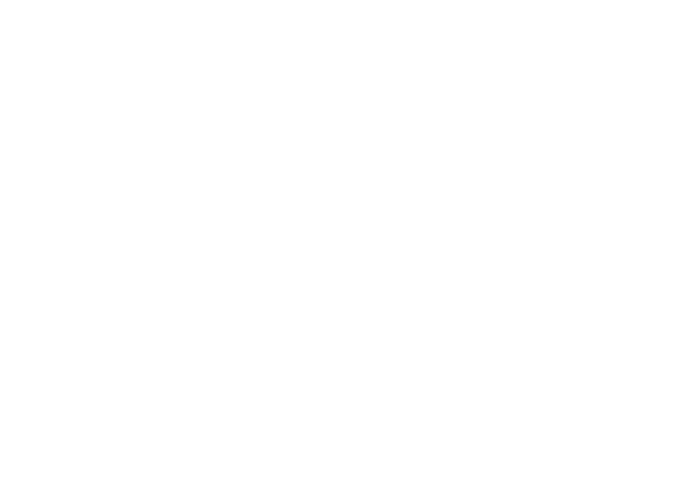 APL has christened its brand new 2010-built, 4259-TEU Container Vessel as “APL SRI LANKA” and has deployed it into their China India Express (CIX) service which touches Jaya Container Terminal (JCT) of Sri Lanka Ports Authority (SLPA) on  its west-bound voyage. CIX is a weekly service connecting East Asia to the Indian Subcontinent port of Nhava Sheva and Colombo. APL is the world’s  fourth-largest container transportation and shipping  company, providing services to more than 140 countries through a network combining intermodal freight transport  operations with IT and e-commerce applications. It is a wholly owned subsidiary of Neptune Orient Lines (NOL), based in Singapore, a global transportation and Logistics Company engaged in shipping and related businesses. APL has offices in almost 100 countries worldwide.

APL possesses many industry firsts, the latest, announced on the 8th inst.  being the satellite tracking of container temperatures, which provides a unique origin-to-destination visibility and protection facilities. This feature called SMARTemp™, whilst heralding a new era for reefer shipping, eliminates costly and time-consuming processes and offers unrivalled time, cost and quality advantages to shippers of products which have zero tolerance for supply chain downtime. APL has also appointed a permanent representative to the Private Sector Consultative Group of the World Customs Organization.

The Sri Lanka Ports Authority, continuing its drive to rope in major carriers, signed a Terminal Services Agreement with APL for exclusive patronage of the Jaya Container Terminal at the Port of Colombo at the beginning of 2009 and according to the agreement, APL has acceded to operate current and future services through the container terminals run by the SLPA. APL has performed strongly in Sri Lanka with year-on-year volume growth of more than 20%, driven by strong Intra-Asia trade.

In celebration of the significance of this move to JCT/SLPA and to Sri Lanka at large, a plaque exchange ceremony was held on board the vessel “APL SRI LANKA”, on her maiden voyage at JCT/SLPA, on the 15th of June, 2010. Plaques were exchanged between SLPA top brass comprising the Chairman, Dr. Priyath B. Wickrama, the Managing Director, Capt. Nihal Keppetipola, the Executive Director, Dr. Sanjaya Sedara Senarath and the Working Director, Mr. Prasanna Kalutarage and the APL top brass including Chairman, Mr. Arthur Senanayake and the Managing Director, Mr. Elias Abraham, in the presence of other senior SLPA and APL officials.

Commenting at the press briefing held after the ceremony, SLPA Chairman, Dr. Priyath B. Wickrama said “I am delighted that APL has taken an initiative to christen their latest 4259-TEU vessel with the name of my mother country “SRI LANKA”, because for me my first priority is my motherland, my second priority is my motherland and my third priority also is my motherland. Words might fail me in expressing the pride that we, Sri Lankans enjoy, when a vessel named after our motherland sails across the oceans.”

“The other piece of good news that I have to share with you in this evening is that the Joint War Committee (JWC) of Lloyds of London has removed Sri Lanka from its list of war-risk areas. We were grappling with negative sentiments of International intelligence companies with regard to the security situation prevailed in the country before we ended the war last year.

I led a delegation to London in December 2009 and clarified the National Security plan in place for ports in Sri Lanka, and also extended an invitation to JWC and independent Intelligent Consultants to make their own risks assessments on Sri Lanka. They visited North of Sri Lanka and had discussions with various parties and now have ascertained the true security situation in the country and the ongoing economic reforms and reconstruction work. As a result, they have removed Sri Lanka from the “Listed Areas” of Hull War, Strikes, Terrorism and Related Perils with effect from 9th June, 2010. Therefore, in the future you will be relieved of paying war risk insurance premiums so that you can consolidate your positions confidently” he further said.

Commenting at the occasion, Managing Director of SLPA, Capt. Nihal Keppetipola said “Container handling at the Port of Colombo is bouncing back and during the last five months Port had handled 1,680,680 TEUs up by 27.3% compared to the corresponding period of the year 2009 where the Port handled 1,319,806 TEUs. The volume handled by SLPA terminals during the last five months is 829,240 TEUs up by 24.4% compared to 666,674 TEUs, the figure for the corresponding period in 2009. So I am pleased to say that we are on a sound economic footing now”.

“APL took a decision in early 2009 to exclusively patronize SLPA terminals. Their decision, according to them, was based on the productivity and efficiency gains achieved at JCT, combined with the customer oriented outlook of the SLPA management. This event today marks the successful culmination of that long standing and unfailing confidence. The christening of APL’s new vessel in the name of our mother country is of great significance to Sri Lanka which fills us with great pride, especially at a time when our country is poised for an economic renaissance with the peace dividend being invested on huge maritime-related infrastructure development projects. Moreover, I consider it a gesture of unswerving loyalty demonstrated by one of our long standing customers towards SLPA.  This would make “SRI LANKA” and its capital ‘COLOMBO” echo throughout the world which is now well accepted as the regional “HUB” port. I take this opportunity to wish APL every success” he further said.

Commenting on the occasion, APL Managing Director, Mr. Elias Abraham said “We are pleased to place on record that our loyalty to the state-run JCT and trust that we have pledged with them have made us christen the APL’s new vessel in the name of Sri Lanka. I am sure this will boost the image of Colombo as the HUB of South Asia.” 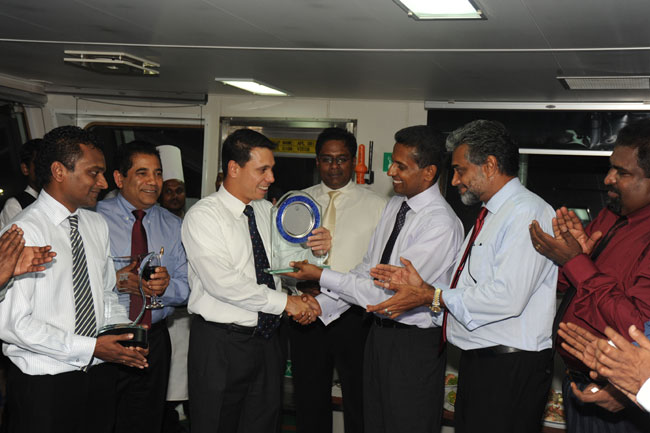 The event was also participated by Director (Port Operations) Mr. G. A Thalagala, Chief Manager (Container Operations) Mr. Jayantha Perera and Chief Manager (Marketing and Business Development) Mr. Upul Jayatissa together with other senior officials. Some key customers of APL were also present at the occasion. 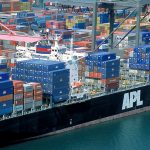 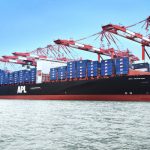